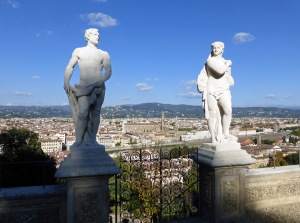 Everyone who visits Florence is familiar with the Boboli Gardens, but few are aware of another magical garden nearby. I Giardini Bardini remained hidden, so to speak, until a thorough restoration of the gardens and the villa by the city of Florence brought them back into the light and open to visitors in 2010. Even though I have been visiting this art-encrusted city off and on for over fifty years, I had never heard of the Bardini Gardens. Today Florence in her abundant generosity spills out another gem from her treasure chest.

The 10-acre gardens are divided into three terraced sections, just above the banks of the Arno River near Ponte Vecchio. The Belvedere at the top offers extraordinary views of the city, without the crowds of Piazzale Michelangelo. In fact, just about every part of the garden offers an unobstructed view, for you alone, to enjoy – The Ponte Vecchio, the Duomo, the Palazzo Vecchio, the city’s rooftops and bell towers with the shimmering river leading your eye from treasure to treasure, memory to memory.

The garden dates back to the 13th century when it was owned by the Mozzi family. It was most probably a fruit orchard to supply the family’s needs for food rather than beauty. It remained in the family until the last of the family members died in 1880. Over the course of the centuries, the gardens were expanded and modified to include statuary and flowers. The stunning Baroque staircase was added in the 17th century, then embellished with statues and fountains in the 18th century. It remains the focal point of the garden and offers heart-stopping views of the city. When the property came into the possession of Stefano Bardini in the early 20th century, the gardens continued to blossom into the masterpiece they are today. 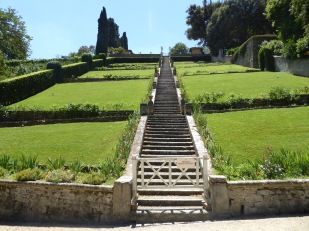 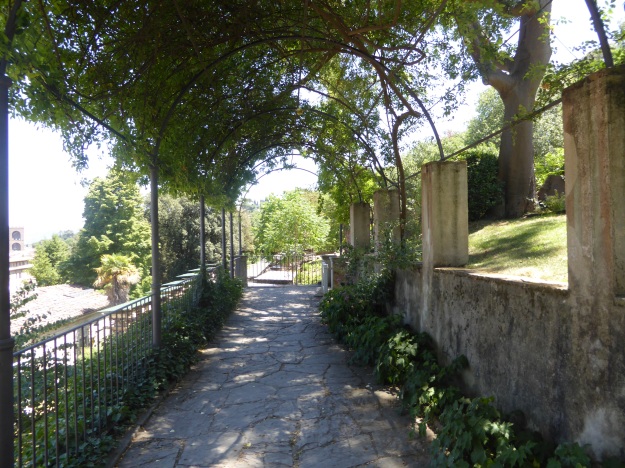 We are here on a sunny October day, celebrating my daughter’s 40th birthday, and the garden offers us gifts at every turn. First to enchant us is the Fontana del Drago, part of an early 19th-century Chinese- inspired garden with a water channel running along its one side fed by the “dragon.” We savor the silence of the fruit orchard, that reminds us of its simple past. Each terrace offers separate gardens, delightful even if we have missed the colorful blooms that painted them earlier in the year – azaleas, roses, irises and over 60 varieties of hydrangea, giving us every reason to come back in the springtime. To stroll beneath the wisteria-covered pergola and see the city gilded by the late afternoon sun, or better yet, at sunset would be reason enough to come back. 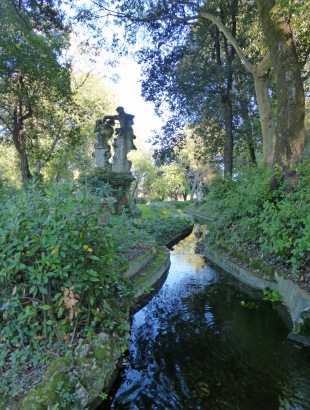 The original villa was constructed in the 14th century and was restructured and enlarged in the 17th century. As new owner, Stefano Bardini enlarged it again, adding the loggia and the limonaia, or lemon house. Known as the “Belvedere,” it now houses two galleries, one displaying fashions and the other hosts a permanent exhibition of paintings by Pietro Annigoni. The loggia serves as an outdoor café, where one can enjoy an aperitif and drink in the views. Or shall we wander and, sip by sip, savor the views as sustenance for our souls?

Entrance fee:
7 € for the Bardini Gardens
10 € combined ticket for both the Bardini and the Boboli Gardens