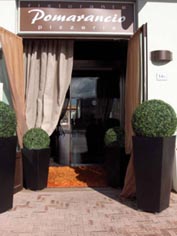 At the confluence of the Upper Tiber River and its smaller tributary, the Reggia, sits the town of Umbertide.  Ristorante Pomarancio is across the river, a stone’s throw from the historic city center and is named after the 16th century artist whose paintings can be found in the nearby octagonal church known as la Colleggiata.  Ristorante Pomarancio offers outdoor dining on a delightful patio overlooking the river with a view of Umbertide’s ancient dwellings, their muted colors softly reflected in the waters below the city’s old stone walls.

Pomarancio’s large interior dining room has a contemporary, understated elegance, featuring pure white china on linens in shades of khaki and off-white, accented by napkins the color of pumpkins.  Soft music plays in the background, but at least twice a month, the restaurant offers live music.  Just recently, on Valentine’s Day, they hosted an evening of jazz to their 120+ diners.

We enjoyed a leisurely Sunday lunch.  A pleasant Rosso di Montefalco wine kept us company through a four-course meal that began with a mound of porcini mushrooms on a bed of watercress and rucola greens, topped with shavings of pecorino.  A light primo of spinach-filled crepes was followed by stinco di maiale al vino rosso, tender pork shank braised in red wine.  Pomarancio’s chef is from Puglia, bringing a little southern zest to the more traditional dishes of the Umbria region.  Enrico Bacchetti, the restaurant’s manager is a man of vision, each new idea simmers until it is a fait accompli.  Expect to eat well and be entertained on a regular basis at the Pomarancio – a successful part of Umbertide’s restaurant scene. 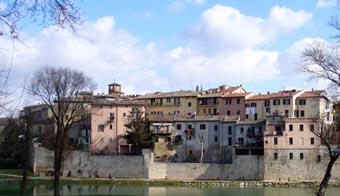 View of the River and Umbertide from restaurant