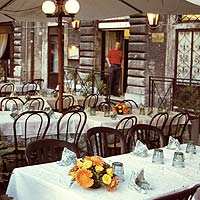 For a typical Roman meal, Antica Trattoria Polese is a good choice.   In business since 1960, it is now managed by the second generation of the Polese family, brothers Paolo and Lorenzo.   Located not far from Piazza Navona, in the historic 15th-century Palazzo dei Borgi, the restaurant includes several intimate rooms inside on the ground level as well as a beautiful basement level with vaulted ceilings. It also has a characteristic canopied dining area set up outdoors in the piazza for fair-weather dining.

The trattoria’s history started in 1961 with a dream and plenty of hard work by two brothers from the province of Molise.   Biagio and Vincenzo ran the eatery until the 1980’s.  Paolo and Lorenzo carry on the dream and the hard work began by their father and uncle, with the assistance of ten employees, half of which are immigrants from other countries, reflecting the changing faces of the Italian population in general.  What hasn’t changed is the quality of their culinary offerings, which have earned them the Cucina Romana Award in recognition of their long-standing tradition of typical Roman cuisine. Giovanni, the chef who produces these many flavorful dishes, began as a dishwasher in 1965.

Paolo Polese is a gracious host, and a very busy one.   The trattoria attracts a large crowd of both Romans and visitors to the city.  We followed his recommendations for our dinner selections and it was a good decision on our part. The tonnarelli (fat spaghetti noodles) con cacio e pepe were delectable, the tagliata (thick beef cutlet) was grilled to perfection and was as tender as can be.   The meals ended with their homemade specialty dessert, semifreddo al amaretto, a frozen cream dessert made with amaretto.  The house wine, a white wine from the Castelli Romani near Castel Gandolfo was a tasty companion to our meal.