In a city where terrace views are astounding, the Plaza Hotel Lucchesi offers a panorama that simply takes one’s breath away. Imagine lounging poolside on a terrace with a vista that includes the exquisite Duomo, the stately tower of Palazzo Signoria among other turrets and domes, the sacred structure of Santa Croce, and the elegant copper cupola of the Jewish Synagogue!

What’s more, the Plaza Hotel Lucchesi offers a proud history, beginning in 1860 as an inn when Pensione Lucchesi was named after its founders. It was during this period that Florence was made the capital of the newly formed Italian Republic. From 1865 until 1871, the city tore down their medieval walls and grew to be an urban center of great importance. The inn attracted many renowned guests, artists and writers, and of particular note, the Italian King Umberto I.

In 1952, it became the Plaza Hotel Lucchesi, following the annexation of the adjacent building and the addition of two floors. Despite two world wars and the devastating flood of 1966, the hotel has not only survived, but also thrived. Under new management, it is undergoing a thorough renovation, adding back some lost architectural features, placing it among the most beautiful hotels in the city, with all the amenities of the 21st century. Its position along the Lungarno della Zecca Vecchia has always been a favorable one, even more so today, offering a quiet respite from the bustle of the city center, yet within easy walking distance of all the sites.

I may not be a notable guest, but I do feel privileged to be a guest at the Plaza Hotel Lucchesi, a place where the preservation of history and modern innovation are so seamlessly stitched together. Our room is comfortably furnished, in a color palette of white, sandy beige and taupe, providing a very restful ambiance – that is if one can sleep with such an up-close view of Santa Croce from one’s private balcony! 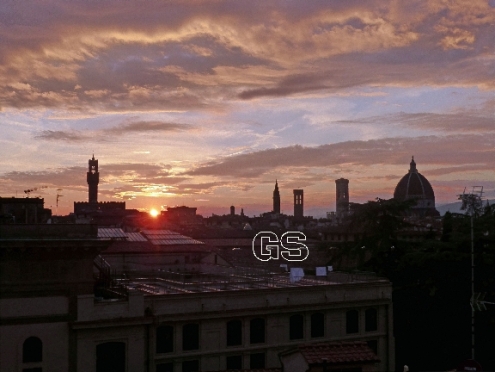 Read more about other lovely hotels and restaurants in Italy,  Rooms with a View and Italian Wanderlust, by clicking on their covers:

More about my other books.

1 thought on “Florence – A Terrace with a View”