In a small piazza by the bell tower of the Città di Castello Cathedral, or Duomo, Caffè Accademia started out several years ago as a caffè and in 2006, it became a restaurant. A cozy, elegant dining room, set in a building that dates back in parts to the 13th century, provides a memorable venue for some fantastic dining. It is an all-woman staff that sees to it that diner guests leave Caffè Accademia totally satisfied. Maruska is knowledgeable and courteous as she presents our meal and in the kitchen, Chef Elisa’s culinary talents are truly extraordinary. We decide to go with their

recommendations and it is a wise decision indeed.

We sample two white wines, a local organic Greccheto and a Bianco del Borgo from the Cortona area of Tuscany. These go well with the two pastas: tagliatelle verdi caccio e pepe, and saccottini (little knapsacks) stuffed with the very seasonal barba di frate, or Monk’s Beard. Also known as agretti in Umbria, these greens are similar in 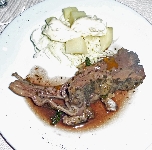 looks to fresh chives. Delicately seasoned, the agretti were then used to stuff the handmade pasta, which was first boiled, then baked in a béchamel sauce. Simply divine!

A sampling of two red wines is offered to go with our second course: one a  blend  of  four  grapes  rightfully  called  Quattro Uva  and  the second, the famous Sagrantino. The lamb, twice cooked, is so tender, one could cut it with a fork and the contorno of potatoes and thinly sliced slaw with a Hollandaise-like sauce was a

Desserts were innovative and delicious: one a mouse creation of strawberry and lavender, and the second dessert was a whipped Greek yogurt with caramelized blueberries. I should clarify that there were two of us to explain, or confess to, how I got to taste two of everything. Ladies, you have done yourselves proud!